Bringing Archives to the Communities They Serve: Three Takes from the Association of Canadian Archivists conference

At the Association of Canadian Archivists annual conference this past summer, three information professionals came together to present on the topic of culturally competent outreach and processing. The session, “Archives of the Marginalized: Working with Communities of Origin to Develop Appropriate Descriptive Records,” covered vastly different collections, but the initiatives had more in common than one might think at first glance.

Moska Rokay is a Master of Information candidate at the University Toronto who also divides her time between the Sisters of St. Joseph archives and the Institute of Islamic Studies at U of T. A member of the Afghan-Canadian community herself, Rokay used her archival skills to build a proof-of-concept digital collection of oral histories reflecting the Afghan-Canadian diaspora experience.

Rokay was frustrated with portrayals of her community, which she often found to be misleading, if not outright racist and Islamophobic. She also found that studies of Afghan-Canadians focused on their immigration and first 10 years in Canada at most, missing many people and stories. “My community has not been able to tell their own stories in their own words,” Rokay commented.

Rokay’s digital archive project is private and password-protected. Its intended audience is the Afghan-Canadian community to see themselves represented and to learn more about the unique experiences of others. While Rokay sees a potential for a more public archive with a researcher audience to counter stereotypes, that is a secondary goal to what she has created. The proof-of-concept collection allowed members of her community to see themselves as part of history. “Archives have always been in the business of identity,” she said, noting that what is in an archives tells you about who does and does not have power.

Raegan Swanson, Executive Director of the Arquives (formerly the Canadian Lesbian & Gay Archives), related the organization’s initiative to better represent transgender people in their collections. Swanson explained that the Arquives has had a relatively passive collections policy for much of its history. Between 2018 and 2019, the organization shifted to a more active policy to address gaps in the collection, particularly the dearth of documentation of the transgender community.

To make sure the community was deeply involved in the expansion of the Arquive’s holdings, the decision was made to hire trans archival assistants based on their enthusiasm and knowledge of LGBTQS+ history and not based on archival training. Sajdeep Soomal and Tobaron Waxman were hired to begin the project. Both received basic training in the Rules of Archival Description and conducted outreach to trans communities in Toronto, Ottawa, Montreal, and British Columbia.

The Arquives relies on donations to do its work, and this project was made possible from both donations and grants from organizations such as the Community One Foundation and the Toronto Dominion Bank Trust. Soomal and Waxman were each paid honoraria for their work. Reflecting on the success of the project, Swanson said it is important to pay people for their time. She also recommended that the project be catered to the needs and interests of the archival assistants, rather than creating a project and then hiring assistants based on predetermined outlines. Swanson hopes the model developed to improve the Arquive’s transgender collections can be applied to including other underrepresented groups, such as two-spirit people.

Tanis Franco, Archivist at the University of Toronto Scarborough (UTSC) presented the description plan for a multilingual fonds from a Tamil-Canadian lawyer and civil rights activist. Samuel James Veluppillai Chelvanayakam (1898-1977) was a lawyer and prominent peacekeeper often compared to Gandhi. He advocated for Sri Lanka’s ethnic minority Tamil community and promoted non-violence. Ontario is home to one of the world’s largest Tamil diasporas, around 300,000 people, and 79% of that community lives in the Greater Toronto Area. Chelvanayakam’s family immigrated to Canada in the 1970s and his children donated his records to UTSC.

The Chelvanayakam fonds presented several challenges for Franco and their colleagues. Structural discrimination and violence against Tamils in Sri Lanka led to the destruction of records and gaps in the archival narrative. While 40% of the records are in English, the remaining 60% are in Tamil, a language that Franco does not speak. Franco recognized the need for cultural and linguistic competency so that the Chelvanayakam fonds could properly be accessible to the community it represents.

Archives Assistant Thamilini Jothilingam joined the project to provide much-needed language skills for processing the Tamil-language records while oral histories supplemented the archival gaps. The team also found digital collections from the Sri Lanka-based Noolaham Foundation to be a great asset. Franco anticipates that the Chelvanayakam fonds will be available digitally some time in 2020. Thus far their team has used RAD and MODS standards for this Islandora-based project. They hope that in the future AtoM’s open source format will allow for a translated Tamil interface on that platform, though this has not been created yet.

I found the session to be very enlightening. All project leaders chose to deeply involve the communities represented in the processes of description. Rokay reminded us that an archives does not have to be for a public, external audience to perform an important social role. Both Swanson and Franco demonstrated that archival training, while important, cannot replace cultural connection and experience. Paraprofessionals with the right linguistic and cultural knowledge can be taught the foundational skills needed to collaborate on archival collections that truly serve the people they are meant to represent.

Hilary Barlow is an American archivist based in Toronto, Canada. In addition to editing the newsletter and blog for SAA’s Human Rights Archives Section, she is a member of the Professional Development Committee for the Archives Association of Ontario.

This is the blog of the Human Rights Archives Section of the Society of American Archivists. The entries on this blog reflect the opinions of each author and do not necessarily represent the HRA Section or the SAA as a whole. 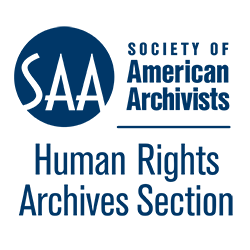